Understanding the mechanisms by which concrete structures can be adversely affected allows a level of design mitigation to be carried out.  I have comprehensive experience in designing and specifying for durability for all structures in aggressive environments, both in the UK and worldwide using state-of-art modelling and current guidance and standards. I am author of a number of publications on the design for durability, and currently advising BS 6349 (marine code of practice) and BS 8500 (specification of concrete) committees on concrete durability.

The deterioration of concrete can result from a range of external and internal processes.  Our understanding of these processes is increasing, and in the main, all such potential deterioration may be accounted for and mitigated against at the design stage so that future repair works or ongoing maintenance are minimised.

Ultimately the resistance of concrete structures to deterioration is determined by concrete quality, design detailing (design for easier construction, construction process optimisation, added protection measures etc.), and the quality of the works (both in design and construction.

Processes that affect corrosion of reinforcement

Processes that affect reinforcement corrosion are those such as

These deterioration processes rely on ingress of aggressive substances to the depth of the reinforcement, whereby over time, the passive oxide film on the steel is destroyed, thus inducing corrosion.  This may happen either by reducing the pH of the surrounding concrete or by the presence of chlorides which locally produce thinning of the passive film and acidification (in the presence of water (with or without oxygen)) to render a similar depassivation effect.  The stage at which this occurs is commonly termed “corrosion initiation”. 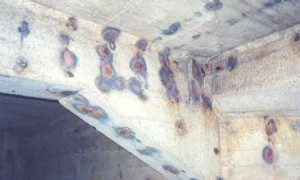 Once corrosion is initiated, and assuming suitable conditions, the process will continue and the reinforcement will continue to corrode until the expanding product

s of corrosion (up to 8 times the volume of unoxidized ferrous species) exert sufficient pressure to cause localized cracking and eventually spalling.  If corrosion continues unabated, section loss of the reinforcement may be so severe as to render the reinforcement inadequate to perform its structural function, and in severe cases, cause failure of the structure. 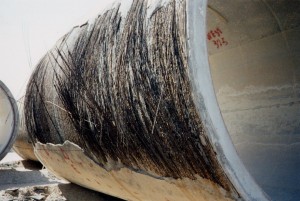 Processes that affect the concrete material

Deterioration processes that affect the concrete mass may indirectly affect the risk of reinforcement corrosion by effectively decreasing the cover, by causing cracking, increasing permeability, which allow the pathway of aggressive materials to attack the concrete, such as:

External sulfates may attack the calcium aluminate phases in the cement and expansively react to form minerals of gypsum (calcium sulfate) and calcium mono-sulfoaluminate (ettringite).  Seawater also contains magnesium which may react with cement hydrates to form magnesium hydroxide (brucite) which reduces the cementitious value of the paste.

Another form of sulfate attack is where sulfates in cold environments and in the presence of a source of calcium react with the cement paste to form a calcium sulfo-aluminate hydrate called “Thaumasite”.  This mineral is not as expansive as ettringite, but it has low cementitious value and ultimately weakens the paste and concrete.  It is rare, but commonly goes unrecognised in foundation concretes. 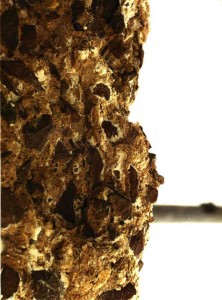 Internal sulfate attack occasionally occurs when concrete elements reach critical internal temperatures during hydration causing ettringite to remain in a non-crystalline state.  On further wetting when concrete is in a mature, hardened state, ettringite may recrystallize causing an expansive and damaging reaction, known as Delayed Ettringite Formation (DEF).  This mechanism was found to affect steam cured precast units but has recently been found in massive concrete structures where thick sections enable high temperatures to be generated during hydration.

Leaching of soluble minerals in concrete is a function of the quality of the cement matrix and the mass permeability of the concrete to resist ingress and dissolution of soluble phases.  This can occur in three main ways; by penetration of water through the body of the concrete, by leaching across the face of the concrete, and by ionic diffusion.  The depth of penetration will essentially be controlled by the permeability of the concrete and hydraulic and chemical gradients between the ground water and the concrete pore water.  However, in high quality concretes it is unlikely that significant leaching of monolithic structures (i.e. concrete with no discontinuities, cracks, joints, etc.) would occur over long timeframes.  The weakened and degraded leached layer acts as a protective layer to the concrete beneath.  Leaching is only likely to be a major factor in degradation in areas of poor quality concrete, that is, in areas of low compaction, failed joints, cracking, or higher permeability concrete from poor production control.

Alkali silica reaction (ASR) occurs when certain types of silica or silicate found in concrete aggregates react with the alkalis in the concrete pore solution to produce an alkali-silica gel.  This gel expands in the presence of water which may cause damaging expansive reactions in the concrete leading to cracking.  The rate of reaction depends on the quantity of total alkali (expressed as Na2O equivalent) in the concrete and the optimum amount of reactive silica (i.e. pessimum proportions) in the aggregate, typically ranging from 5-60% of coarse and fine aggregates containing reactive silica such as chert and flint. 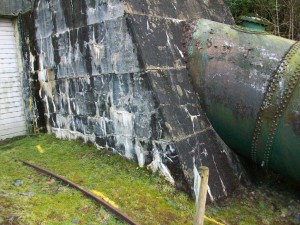 Both freeze-thaw and abrasion rely on the quality of the aggregates used in concrete mix design.  Outer zones of the concrete may become saturated with water that freezes, causing expansive forces to crack the concrete causing surface scaling. Constant impact of bed or suspended sediment causes concrete to be gradually worn away by the processes of attrition and hydraulic cavitation.  Scaling and reduction of section thickness are typical consequences of these types of degradation.  Hard, durable, natural aggregates are typical requirements when considering these types of attack.  The trend in the US and Japan is to incorporate entrained air in concrete to aid frost resistance, which is also advocated in European standards.  Air entrainment can be of economic benefit in certain circumstances but compressive strength is reduced.  The design of high strength (>50MPa) mixes that include silica fume (microsilica) have also been found to adequately resist frost attack.

Biological attack caused by growth on concrete structures may lead to mechanical deterioration from lichen, moss, algae and roots of plants and trees penetrating into the concrete at cracks and weak spots.  Such growth may also retain water on the concrete surface leading to an increased risk of deterioration due to freezing.  Microbe growth may also cause chemical attack by developing acids, dissolving the cement paste, or corroding steel embedments.

Early thermal cracking occurs where concrete at early stages develops internal stresses related to the thermal gradients and restraints within its mass exceed the tensile strength of the concrete, resulting in cracking.  Early thermal cracking may occur in two ways; on heating up of a large concrete mass or during cooling and contraction.  The control and mitigation of early thermal cracking is complex, as is the identification of the mechanism when assessing cracking patterns.